“There are only two genders, male and female. I don’t know what the fuss is about. You can only be in one [category] or the other.” -An ignorant person

Last week, I came across a Facebook post in a group that said that gender is dependent on someone’s genitals.  As you can imagine, that horrified me because I teach this every semester to my students at the university, and to actually know that some grown people didn’t know the difference shocked me, AND didn’t shock me at the same time.  As a person who is in the sexuality field, it’s vital that we know the differences between these things, and most of all, that we teach others what the differences are between these things.

At the same time, my wife went through a job training and she told me that she wished that I was there because someone had said something that she knew was way off.  The person, who was above her in rank, stated, “There are only two genders, male and female. I don’t know what the fuss is about. You can only be in one or the other.”

There are so many things wrong with this sentence, so I’m going to break things down, as simply as I can.  For more detailed information and see how you would fill out your gender chart you can go HERE.

SEX refers to female (XX with vagina/vulva), male (XY with penis), or intersex (varieties of chromosomal and physical differences).  Intersex folks have a variety of sex characteristics, but for the 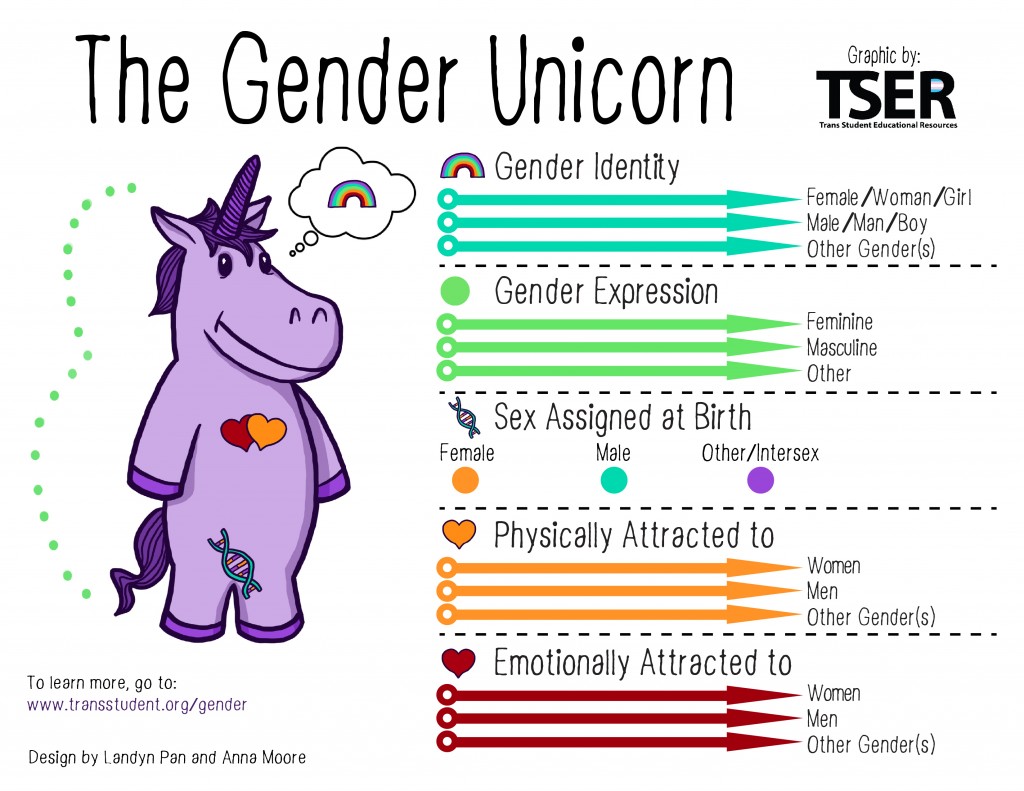 most part, there are over 17 types of intersex people and it occurs pretty often (between 1 and 1500 to 2000 births). More information can be found HERE. Sex is biological, but can also be physical because of how we have socially constructed what determines female or male.

A lot of people mix up SEX with GENDER or GENDER IDENTITY.  GENDER IDENTITY has to do with whether or someone identifies as a girl, boy, child, woman, man, trans, non-binary, etc.  It’s an identity and it’s the labels that we use for ourselves.  Just because someone has a vagina, it doesn’t mean that they identify as a woman.  They might identify as a man, non-binary, trans, etc.  These are the labels they put on themselves and so you should respect that label, whether you agree with it or not.  How would you like someone telling you who you are and how you should identify?  I’m sure you wouldn’t like it.

GENDER is a spectrum of femininity and masculinity.  Some of us, including myself, love the polarity of gender or the mixing of gender, and it is often found in our GENDER PRESENTATION.  Do you dress feminine or masculine or a mix of both?  As a society, we’ve decided that certain types of clothing is feminine and masculine (usually in girls/boys and woman/man sections in the clothing store).  Although our presentation is the way that we show people our gender and/or gender identity, we are often inundated with gendered stereotypes of how we should act and behave according to our femininity and masculinity.

SEXUAL ORIENTATION/IDENTITIES can refer to who we are physically and/or emotionally attracted to and/or how we behave sexually.  There are many sexual orientations and many orientations fall under certain sexuality umbrellas.  Traditionally, we have had heterosexual, lesbian/gay, and bisexual identities.  However, there are identities such as queer (non-normative), asexual (lack of sexual attraction [not behavior]), and other identities that involve having consensual sex with a person that are dependent on emotions, intelligence, etc. You can have as many sexual identities as you see fit; no one else can tell you what your sexual orientation or identity is.

Now that I’ve armed you with some real information, it’s important to note that we can and we can’t make assumptions about how people live their lives and how they identify.  Should we assume?  No.  Do we assume?  Yes.  However, it’s best to get folks pronouns (she/he/they/their name/etc.) if you’re going to be talking about them and not to them.

As some of you have probably noticed, I never say “woman” or “man” unless I actually mean it.  Most of our characteristics are a blend of femininity and masculinity, so for me, it’s important that someone can always see themselves in my writing and when I’m giving advice, regardless of the genitalia you have (unless I’m talking about your genitalia).  Most of the time when I’m talking about genitalia, I refer to people as “folks who have vaginas” or “folks who have penises” so that it doesn’t alienate folks who want to learn about genital stuff.

Regardless, be conscious about the differences between all of these things.  Most of all, if we can withhold judgment and take people as they are, we’d be a better society that is tolerant and accepting and not xenophobic.  When we all accept that we have more similarities than differences, we can come to a good place and understand each other better.

Cheers to your sexual success!

P.S. I did a quick video experimenting with the lightboard at the university, so if you need a visual, you can check it out HERE.  Remember, there have been many more changes since I did this in January 2016, so please forgive the outdated information and order in which this was done.